WORLD JAZZ LIVE SESSIONS AT THE TOWER - Hosted by Maiuko Liane Caroll is the first artist ever to win two BBC Jazz Awards in the same year, for Best Vocalist

Liane Caroll is the first artist ever to win two BBC Jazz Awards in the same year, for Best Vocalist and Best of Jazz. She is a dynamic vocalist and pianist whose amazing talent has been captivating audiences around the world. Recognised as one of the finest singers/pianists on the scene, she has worked with the likes of Gerry Rafferty and Paul McCartney, and has been a featured performer at Glastonbury Festival.

Her albums have been received with universal acclaim and led to an hour-long special on BBC TV. Her CDs Up and Down and Ballads on Quiet Money records, produced by Grammy-nominated trumpeter/producer James McMillan, garnered impressive reviews, ‘magical’ (Guardian), ‘brilliant’ (Observer). A world-class performer, her powerful blues-tinged voice combined with strong piano playing and exciting infectious material, not to mention a wicked sense of humour.

‘She seems in some magical way to be made out of music’ – The Observer, ‘Swinging like hell one minute, brutally expressive and heartbreakingly tender the next …utterly brilliant’ – Time Out, ‘A jazz force to be reckoned with’ – The Independent, ‘World class’ – The Guardian, ‘Deeply soulful’ – The Times, ‘Unswerving honesty and molten intensity … burningly expressive’ –Jazzwise 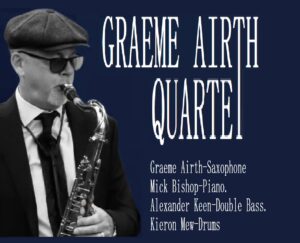 Originally from Glasgow, Graeme is a graduate of the London Centre of Contemporary Music. Over the decades, Graeme has had a varied career, played and recorded with various pop groups and solo artists, starting out as vocalist and bass player with Leeds band ‘The Mirror Boys’ then playing saxophone with 80’s pop band ‘Curiosity killed The Cat’.

Later, he returned to his first love of modern jazz, especially blue note and show tunes, Airth  is constantly striving to learn new material and study the art form which he performs on his vintage saxophones.

Now based in St Margaret’s, Graeme Airth has teamed up with local musicians to work towards releasing an album of original tunes, some of which will be played on the night.

The Counterfeit Sixties
Scroll to top